In the middle of the night, I was awoken by the alluring fragrance of bread, freshly baking in the kitchen. Aaaaahh, right at that moment, it was so tempting it almost broke my will to maintain my longest IF streak of 323 days. Intermittent Fasting has been a breeze for me, not even the decadent breakfasts served on the cruise ship to the Baltic countries could weaken my resolve. But, this wasn’t a visual sensation. It was olfactory. My senses were heightened by the temptation of the wicked scent. I had to subdue the strong urge inside me that wanted to quickly devour the enticing bread in the kitchen. I imagined getting up right that moment from my cosy bed and braving the chilly dawn. In the dark, I would not find my dressing gown. It is the one piece of clothing that I don’t habitually hang in a fixed spot, whereas my bedroom slippers, always at my side of the bed, were neatly placed side by side on the carpet. They don’t wander off. They never require me to look for them, unlike the itinerant dressing gown. In my mind, I was already in the kitchen, unscrewing the nut on the base of the bread container to free the bread onto a plate. As I slice the wonderful soft white bread, more of the aroma that had seduced me to leave my bed is released. Spread a wafer thin piece of butter onto it, and bring it towards my eager lips. As I consume it, I surrender to the wickedness of the carbohydrates that will cause my insulin level to spike. My mind may be weak but my shadow self is strong. It only allowed me to think it happened. It didn’t happen, except in my mind. That’s as real as it gets, right? After all, it is the same chemicals that the brain releases that tell us how we feel. Whether it is physical, virtual or imagined, to the brain the sensations are the same. Serotonin, endorphins and dopamine are the happy chemicals that are released by the brain irrespective of whether the trigger is real or imagined.

Back to my bread. I rushed out of my bed before 7.20 AM, put on my bedroom slippers and darted to the kitchen. I was eager to see if the bread matched the one in my mind for fluffiness, size and height. It did not. It was a total flop. Do I throw it away, make another one before The Mrs wakes up? “Don’t let her find out!” my shadow self implored me. Disappointed with myself, I went outside to the front garden to console myself. Where did I go wrong? Never mind, I’ll find out soon enough. The Mrs won’t let this opportunity slip by, it is her chance to tell me what I’m worth. She will flip when she finds out the bread is a flop. “Aiyaya, you waste the flour! You waste the elektrikcity! You waste your time!” I have heard this many times in my life, the way she emphasises the “K’s” in electricity. An hour later, she purrs out of the bedroom. “The bread smells so gooood!” she chirps happily. She limps out gingerly as she appears in the hallway. At least she doesn’t waddle anymore. In another week or so, she will fully recover from her second hip replacement. By then, I had better watch out. Better not cry. She will have her vengeance. The new bionic woman will eat me for breakfast if I don’t make her good bread. She flips when I flop. A no-nonsense woman. She has no truck with failure. “We do not fail. That’s for the weak. We will rise up!” (As surely as my bread must, next time) I added silently in my mind. Why did my bread fail to rise? “Warm water! Yeast is a living thing. It needs warm water, stupid!” She didn’t call me stupid but I heard it anyway, in my mind. So, The Mrs grabs her chance and pours cold water at my silliness. I used tap water instead, thinking the time set for three hours would be enough for the yeast to work and make the bread rise. Worse was to come. Having had to chew on soggy heavy bread and missing out on the enjoyment from what is normally the best meal of the day for her, the demeanour of The Mrs turned from chirpy to annoyed. “If you want to stick to your (stupid) cold water theory, I’ll eat Coles bread instead. I don’t enjoy chewing leather. I can’t afford to lose my teeth!” Untethered, free to show her annoyance, she plonks her plate and coffee mug loudly into the sink. I was pouring a cup of coffee for myself when I heard the commotion. Quickly putting the moka pot back on the stove, I rushed to empty the sink of its dirty contents, transferring them to the dishwasher. In my haste, the moka pot was placed precariously on the gas ring and it toppled over. “Aiyaya! What a disastrous morning!” she exclaimed. My freshly brewed coffee spilt everywhere. Into the gas burners, into the gas oven, it drowned the oven clock, and splashed all over the kitchen floor. Somehow the coffee must have got to the electrical bits of the oven and tripped the main fuse box of the house. Everything stopped. The noisy pond fountain, the soothing trickling of water from the aquarium, the whirring of the washing machine, the background humming from the central heating system. The dead silence didn’t last long. I shan’t repeat what transpired between the two occupants of the house after that, except that the bedroom door slammed shut soon after. The unintended consequence of wanting to make bread for The Mrs. I later found out the flour was four months past its expiry date, which leads me to think I was dealing with dead yeast.

A son sent me a few messages. “Life is short, ba. Why make mum eat that bread?

“She said it’s as tough as leather!”

“The bread flopped, so what? Go to a cafe and enjoy the weekend”.

He too flips when I flop. Why would anyone think I can force their mum to eat anything? She is a strong woman. Strong headed too. There is no way I can make her do anything that she doesn’t want. Besides, that would be misogynistic and I am certainly not built that way. I did not dare to argue their preposterous suggestion about the bread being as tough as leather. I am quite sure none of us have tried leather. But, they will freak out if I dare voice my thoughts on the matter.

A lesson learnt. The next time I use active dry yeast, I will definitely check to see if it’s alive first. Dissolve half a teaspoon of sugar in half a cup of warm water. Sprinkle the yeast on top and stir. After ten minutes, I will know the yeast is alive and will proof the bread dough if there are bubbles and foam in the mixture. Failure is forever only if we quit. On second thoughts, the other lesson learnt is easier to remember. Just don’t bother making my own bread.

I just came home with a fresh loaf from Foodland. Urghhling. 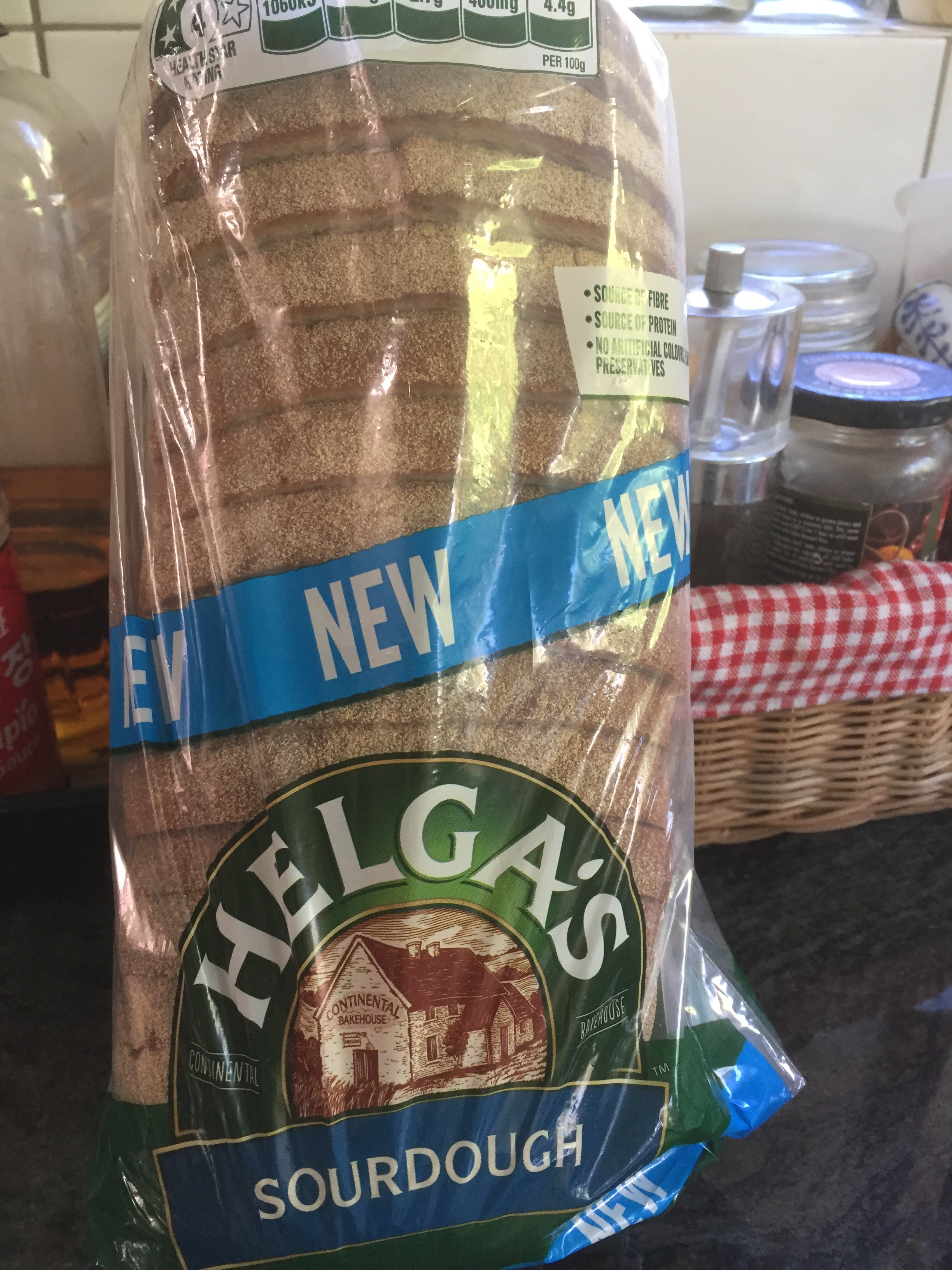