Keong! Keong ah! Keong Hee Huat Chai! Kung Hei Fat Choy! Gong Xi Fa Cai! Sure enough, the barrage of congratulations intensified as the clock approached Chinese New Year (CNY). Congratulations on your prosperity! We Chinese are either stubbornly optimistic or stubbornly delusional. Most of my friends are in their sixties, and none are prosperous, flourishing with great wealth like the Gates, Zuckerberg, Bezos or Rothschild families. Yet, they did not hesitate to congratulate one another, as if they had all struck gold or oil. I got congratulated too – even though an observer and a failed entrepreneur, their enthusiasm pulled me into their vortex of excitement and congratulations. On the eve of CNY, all chores involving the broom and sharp instruments such as knives and scissors had to be completed before midnight. It is a definite no-no to touch such gadgets on “Choo Yi” first day of CNY – try it and the year will be cursed, for sure. I ran out of energy after work yesterday and abandoned earlier plans to vacuum the house last night. I reasoned that the Kitchen God and Money God (Caishen Yea) would understand that we here in Australia cannot afford maids to do our housework – they would not spurn my house over a few specks of dust, I hope! As a minimum, I did change the linen in the guest room – only because I knew my mum was spending the first three days of New Year with me. My house was not designed to have a guest room. It was originally a formal lounge with a connecting formal dining room. They were converted into a bedroom for The Mrs’ parents, and a music room for the boys. After we became empty nesters many years later, this room has become a guest room. There is no economical sense to build a guest room. Why have a spare room that by definition means a room that is rarely used? Most of us have to take up a lifelong mortgage to build a house. Why spend that amount of money on a guest? It would be cheaper to put the guest in a hotel, right? Benjamin Franklin said guests are like fish. They are fresh and wonderful on the first day. On the second, it is still okay to enjoy them, but come the third day, we will find the fish off and the guests decidedly off-putting. To avoid such ramifications, I shall not treat Ma like a guest. She is my mother!

Xin Nien Hao! Happy Chinese New Year. Today is Choo Yi, the first day of the Year of the Rat. Chinese horoscopes say the metal rat will bring prosperity to most zodiac signs. But, do Chinese horoscopes ever not mention prosperity in their predictions? Ma is staying with me for three days. This is the first time Ma is staying with me for CNY celebrations since I left home in 1977. This is also my first time to enjoy a long weekend celebrating CNY in Australia. The traditions become important this time although Ma is quite relaxed about stiff customs. Since Ma is around the house on Choo Yi, I shall adhere to the rules that have ruled Chinese for a few millennia:

What I did achieve – yes, considered an achievement by none other than myself – was I made the traditional sweet soup for CNY breakfast. Ma unfailingly made that for us every Choo Yi when we were kids. I looked forward to our first dish every CNY with the eagerness of a child in a lolly shop. When Ma was in her eighties, she still made it for us. “Us” by then included many grandchildren, so the serves became much smaller. Today, I realised it is a simple dish to cook, yet it is tasty and packed with goodness. White wood ear mushroom and longan soup. Clean and rinse them. Throw them into a pressure cooker. Add water and palm sugar. I could not find the lotus seeds in the fridge even though The Mrs said “they’d be staring at you in the face”. Cook for 20 minutes, open the cooker once pressure is released, cut the wood ear mushroom into bite-sized pieces, add hard-boiled eggs (and goji berries, if I can find them in the fridge). Keep warm until everyone wakes up. Goji berries are a super-food, I add a handful of them to my rolled oats for breakfast in the office. Their medicinal benefits are finally being supported by Western science – otherwise, they are “unproven” and demoted and dismissed as “old wives’ tales”. The Mrs was so impressed with my dessert soup she said that will be my job from hereon. She is not just a good artist, she is artful as well – being easily impressed with me with the many things I do around the house.

CNY in Australia is usually a non-event – just another working day, never a public holiday. Occasionally, it may fall on a weekend but that made no difference to me. When I had my retail shops, work tied me down 7 days a week for twenty years. Sad, looking back at it. So foolish to have allowed circumstances and false ambitions imprison me and reduced my life into mostly work and commitments. In those twenty years, I would have been lucky to have read maybe ten books. Thankfully, I was able to free myself from that “life sentence”. The last seven years have been good years with leisurely weekends of gardening and reading (and now, writing). The amazing gift from YouTube – free CNY music and video clips streaming into my living room all morning, has kept Ma entertained. My earlier selections were 2020 CNY music, but many of the songs were not familiar to us. The black and white one turned out to be the best for Ma. She was visibly enthralled to see names familiar to her, popped up on the TV. Lin Dai, Wu Yin Yin, Tse Wei, Kha Lan. Familiarity does not breed contempt to the aged. Rather, it is a friend, a companion. 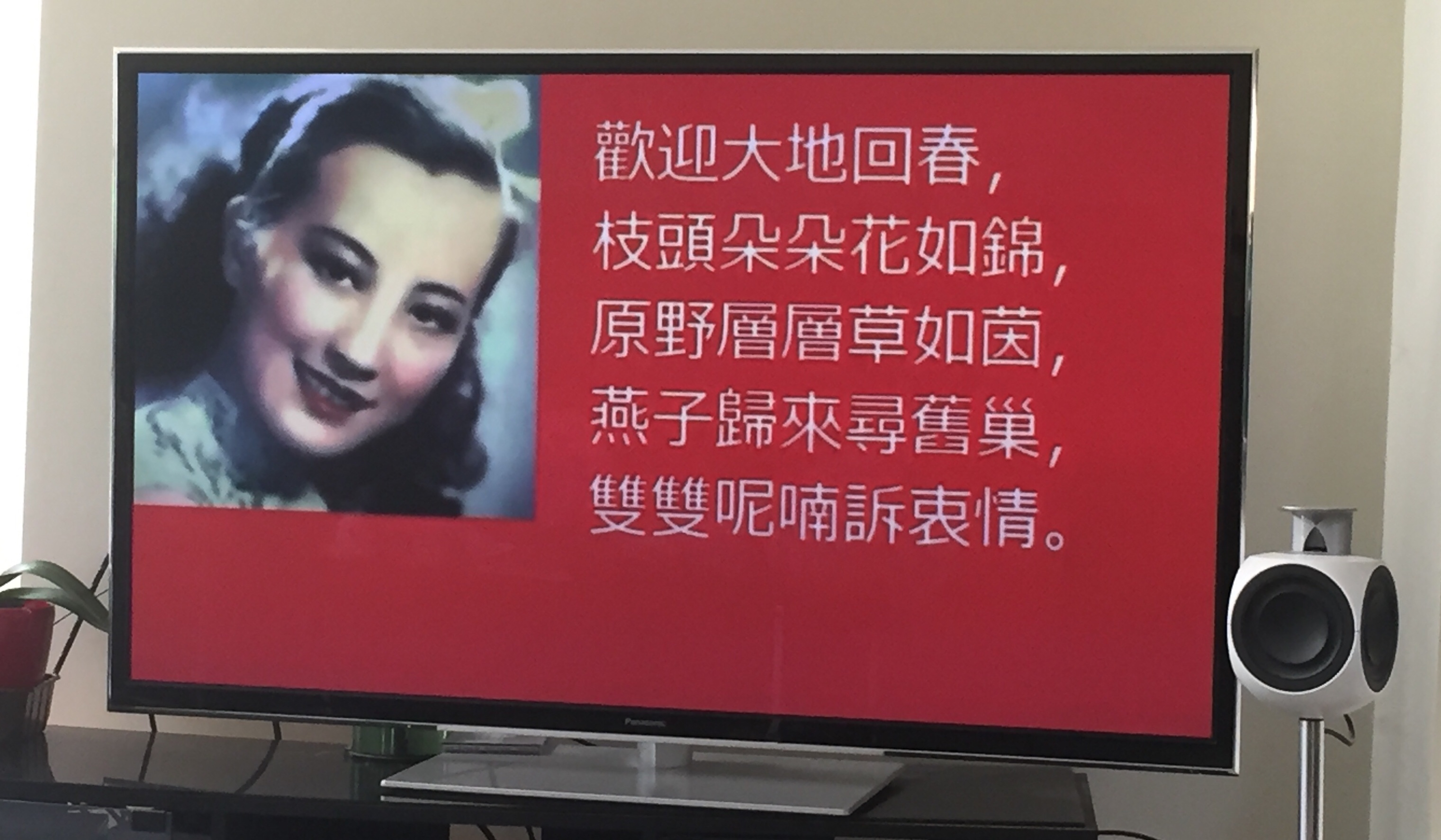 Inevitably, these old songs and songstresses of yesteryears, revived her old memories. I suspect they were never deeply buried. How could they be, even though they were buried so very long ago? She was talking about her four children who never made it past their first day on earth, who never enjoyed the thrills of a Choo Yi. Never an Ang Pow (cash in a red envelope) under their pillow, never a dessert soup for breakfast, never the crackling sounds of firecrackers. The first casualty after the war was a premature boy – he was born at 24 weeks in 1948. The hospital, Penang’s General Hospital, did their best, but he did not survive in the incubator. The following year saw another episode, this time a girl, also premature at 24 weeks. The hospital had lost their credibility with Pa. On August 5th 1950, Pa decided to bring Ma to the “Khor Ning Clinic” in “Chia Chiu Lor” instead. A son was born there, premature at 32 weeks. Wet with amniotic fluid – the cotton wool supplied was sparse – he was hastily wrapped with Ma’s trousers (no blankets were supplied) and left on the floor below the baby hammock or “yaolan”. “Why did they not put him in the yaolan?!” I asked with an incredulous gasp. “The baby was still dirty”, Ma replied. “Oh, look, look. He’s smiling at me”, Pa beamed a proud smile. Unfortunately, the baby sneezed and died soon after. Early mornings in Penang during the 1940’s could be quite cool in the rainy season, especially in August and September. “Where did they bury the babies?” I asked Ma. The nurses took the bodies away, disposed of somewhere decent I hope. “They did not provide a proper burial?” I pressed Ma. No, they were “not human yet”. In December that year, Ma lost another child. That one was also not human yet, a mere three month old that “flowed out” from her whilst she writhed in agony on the wooden floor of their shop house in Penang Road. The bloody show came much too early. I am grateful these siblings did not suffer the scourge of the urghhlings. No matter no CNY celebrations for them on Earth. Ma, we still celebrated their memory on CNY 2020.