Bikash sends me another gem, a reminder that it’s not happiness that makes us grateful but gratefulness that brings happiness to us. There’s a lot to be grateful of, therefore there is a lot to be happy about. We just need to view our circumstances from a positive perspective.

I woke up with a troubled tummy for the third day. It’s worse today, as the exotic foods I had have by now been infused and churned with the dozens of Durian from yesterday. I was greedy, and now I’m paying the price? No, I’m grateful I had the opportunity to enjoy the diverse tastes of the fruit. Now I know how to differentiate between Ang Bak and Bak Ewe, Green Skin and Lin Fong Chiao.

I have been over-eating and observing my Intermittent Fasting programme with abject failure. My pants are tighter, which means my belly fat is embarrassingly visible. An accidental glance at a shop window gave me a horrible fright, I saw myself like I never saw myself before. Now I hear what my cousins said about me. IF has made me skinny and my muscular frame a distant memory. Why are you so silly? You reject food when it’s served in front of you? What does your mother say? Aiyah, so stupid! Life is short, eat, eat eat! Everything in moderation, another cousin chimed in. My cousins were echoing that same message throughout last night’s dinner. This concept of moderation, how much is it before we exceed “moderation”, I asked her. You’re eating in moderation, and is that why your arms are flabby? Another cousin said leave it to our Maker. It’s already preordained. We can’t change our date with destiny. The Lord maketh us and toil addeth nothing thereto. No matter what we do, we can’t improve ourselves. Am I sad? How should I react to that? I didn’t need to. She went on to say her brothers have already told her she sounded like an uneducated woman. No, I was not the least mollified by the barrage of criticisms about my IF programme. It’s backed by science. I invited them to argue with Dr Oshumi, the 2016 Nobel Prize winner for Physiology, who reported the benefits of autophagy from fasting. Don’t argue with me, I’m not qualified. But, I’m grateful for the opportunity to spend precious time together with my 89 year old auntie and a few cousins. My lovely aunt even stepped into a bar for the first time in her life. Cheers. Being grateful has brought me much joy and meaning to my life.

Whilst waiting for a friend to pick me up for lunch today, I noticed a homeless woman ranting loudly about how she is going mad from despair. She has bloodied wounds on her foot and back, her left leg is noticeably swollen. She didn’t ask me for help but I gave her the box of Him Heam biscuits meant for my friend. He won’t miss what he doesn’t know, I rationalised. After that, more sob stories rattled off her tongue. Wow, I hope you’re not trying to scam me for money, I told her. It’s scammers that make it difficult for good samaritans to keep helping. A fool and his money are soon parted. The warning bell tolled long and loudly as I took out a RM100 note from my wallet and handed it to her. Don’t lose it, I said. Don’t be scammed by anyone. Use it for food only, ok? Such good advice, right? Sometimes I should listen to my own advice!

Anyway, she didn’t show any gratitude like you would expect from someone in such dire circumstances being just handed an equivalent of 20 plates of Char Koay Teow. Not a word of thanks, not a nod of acknowledgement. Hmmmm, I did say we ought not to have any expectations when we give. 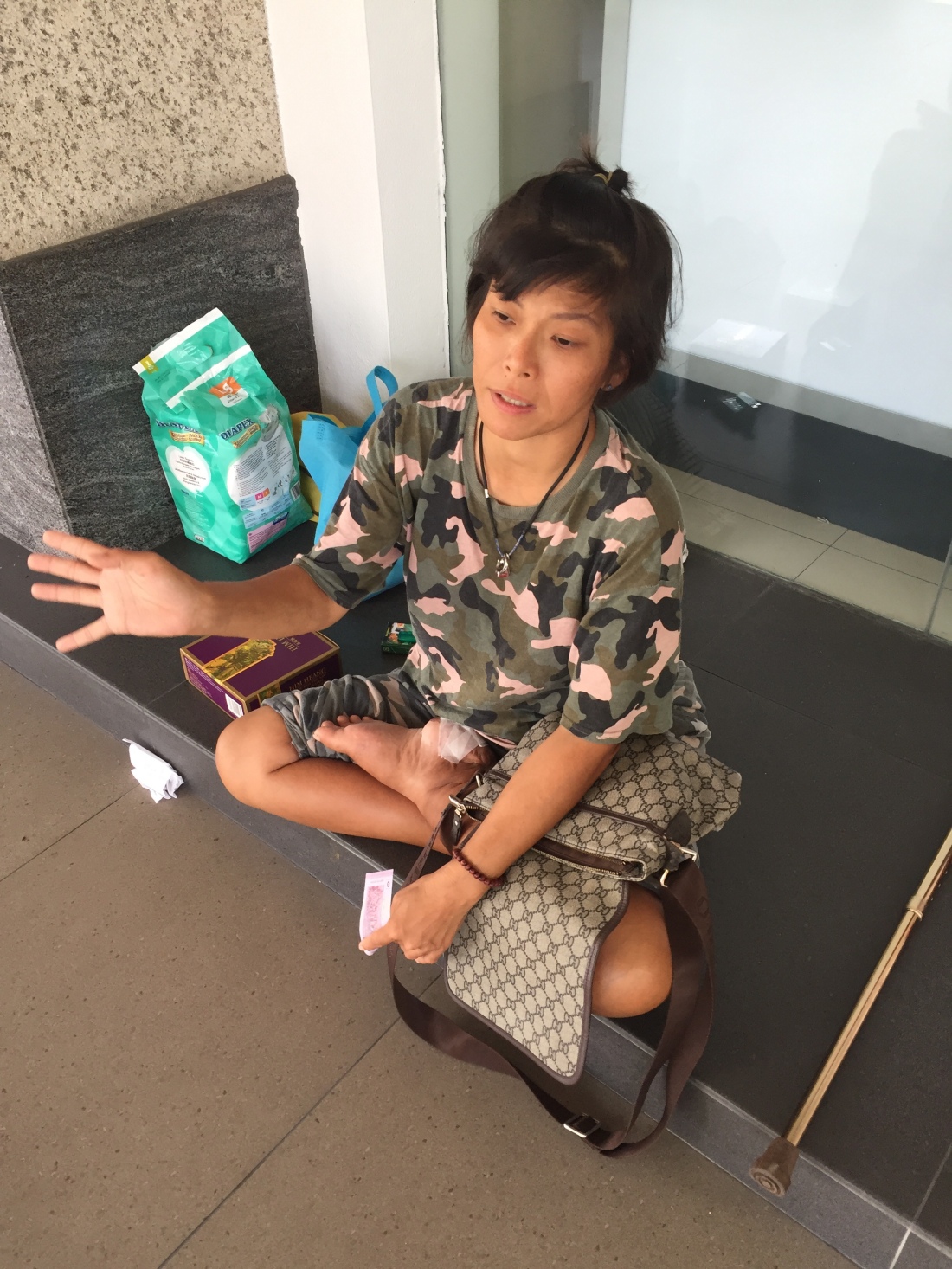