Reunion no.8, what an overwhelming event. I almost choked when I was on stage, maybe it was the Yee Foo noodles down my throat. A reunion of old school mates, some of whom started school life with me, in 1965 right through to 1975. That gives us a special bond, despite it being severed for 44 years. That’s a life time in Victorian days. That’s also a lifetime for many lost brothers. I was shocked by the casualty list, the lengthening list will become more and more casual, unfortunately. RU1.0 was held in 2008 and everyone has been excited at the increasing number of attendees since then. On reflection, the number instead will decrease over time. After all, we have all passed middle age, our twilight years approaching with accelerating speed. With a vengeance perhaps, the way we eat, drink and party till late here, surely the day of reckoning is beckoning.

I was keen to meet some of my school teachers, particularly the Malay teacher who taught us Bahasa Malaysia, and the biology teacher. The Malay didn’t turn up, not surprisingly. He was a sadist who turned and twisted many a nipple of those unfortunate students of his. I was one of his victims. Faham kah? Faham kah? He repeated as he asked me a question. I didn’t understand what faham meant, so I kept shaking my head. Each time I shook my head, the harder he pinched and distorted my nipple. Faham kah? I should have been smart enough to nod instead of continuing shaking my head. Duh! The class laughed and applauded with each twist and turn of the nipple. The classroom rebel was born that day, what class! By the way, faham kah means do you understand.

My biology teacher unfortunately does not remember me, even though I remember her well. I was inconspicuous when I thought I was special. I retold her the story of how I challenged her in class during a frog dissection session. Why do we need to dissect a frog per table of five or six students? Why not just dissect one frog per class? Why at all? It’s not as if school children will miss some significant knowledge that couldn’t be attained from a Form teacher? Why would a chloroformed frog teach us more? I gave her a hug but I think she was visibly afraid of me and my Rasputin hairstyle. Never mind, that was for all the frogs that were sacrificed.

The spirit of brotherhood amongst the original St Xavier’s guys and those from La Salle should be the envy of many. It’s a rarity to find such amazing camaraderie amongst men who are strangers in fact. We may have met some during our school years, but some didn’t meet at all. The Xaverians from Branch School joined our school, SXI, from Form 1, whereas the Lasallians came three years later. Our year had some 450 students in secondary school, many I hardly knew or never met. I rationalise that it was because I lived just a hundred steps from school, and thus had no opportunity to roam about with mates after school. Even those I hung around with in school were mostly unrecognisable. Some faces I could connect to their name tags after some recalling, others were faces of strangers. Even cheating didn’t help, I soon peeped at their name tags first, some names I instantly have an affinity for, others were long forgotten or never were acquainted with. Seldom did I connect a face to a name. Yet, the spirit of brotherhood was undeniable. I was overwhelmed by the incredible goodwill and unmatchable welcome from these brothers. The Lasallians taught us all to call one another Brothers. Think of blood brothers, brothers-in-arms, brothers in shining armour, and you’ll know what I mean. These guys will do pretty much anything for one another. One even took his shirt off his back and gave it to me because I loved it so much. I asked to buy one. Alas, it’s a limited edition, sold out last year. They treated us, “out-station” guys as if we have VIP special status. Out-station here means visitors from interstate or overseas. We are the long lost brothers, unconditionally welcomed back with open arms and strong bear hugs.

“Brothers Forever” on a banner flashed across my view but it also flashed dismay in my mind that somehow we Brothers have forgotten the Form 6 girls who attended our school for two years. I think they should not be excluded. Maybe RU9.0 will flash a banner that says Brothers & Sisters Forever. 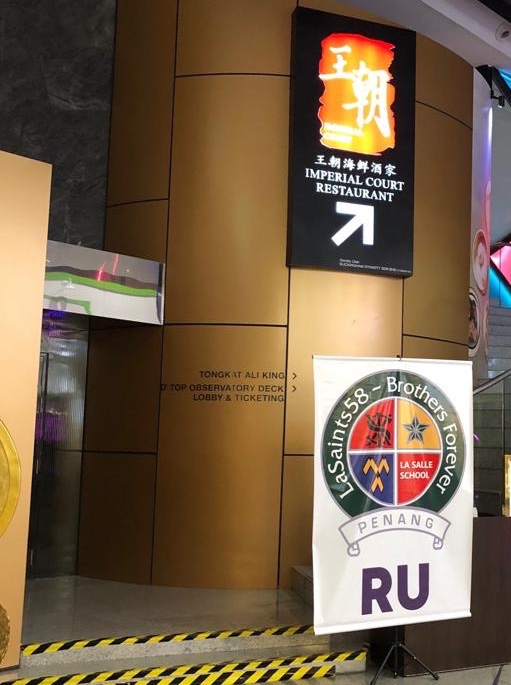 RU8.0 was an unforgettable event and will remain embedded in my heart till the end of my time. We let our hair down all night, well, at least literally for those with long hair anyway. Too many were bald or balding. We rocked like youthful fanatics until the ground rocked. At precisely 11 pm everything and everyone started swaying. Earthquake! I screamed in my mind. But, later I realised it was a false alarm, people were swaying because they were totally inebriated! My brothers missed me so much, it was quite touching. Throughout my short stay in my birthplace Penang, they often called out miss (my surname), miss (my full name), miss (my initials). I’m so overwhelmed by how much they have missed me. Missing me may have something to do with my hair, someone joked.